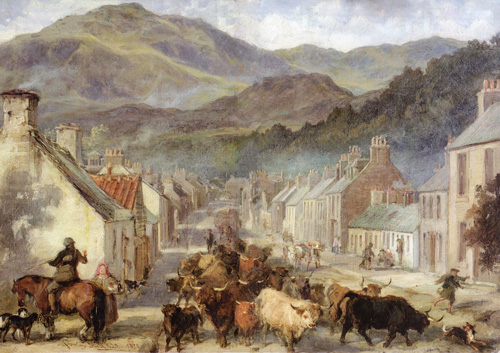 Cattle drovers, people who drive cattle to market, were regarded as important members of the Highland community. The upland soils are ill-suited to growing crops so cattle-rearing was a vital part of the Highlander’s life and economy.

Hardy Highland cattle were gathered from settlements and farmsteads across the northern glens and driven south along traditional routes (see map in ‘Look’ section) to ‘Trysts’ – meaning fair or market –  where they could be fattened and sold for slaughter. Many of the routes would have followed specific topographies that the cattle could manage.

The cattle themselves were the forerunners of today’s Highland cattle. They were much smaller than most breeds today, probably not weighing much more than 254 kg’s, and were, and still are, the hardiest of breeds and easy to handle. Until red/brown variants were exported from Glen Lyon in the mid 19th century, they were black. The gene for the red/brown colour proved to be dominant and this is now the colour of most of the breed in various shades.

Scottish droving grew to a huge scale in the 18th and 19th centuries following the Union between Scotland and England in 1707 when it became easier to trade across the border. The Napoleonic Wars in the early 19th century created an exceptionally high demand because it was the custom to give a daily ration of salt beef to every soldier and there were an enormous number of men under arms in the British army and navy at that time.

All drove roads led to the Trysts. Cattle from the North East of Scotland, Morayshire, Aberdeenshire, and Angus, passed through Alyth and Blairgowrie, whereas those from further north and west converged on Kirkmichael on their way south towards Dunkeld and the great cattle fairs at Crieff and Falkirk where the big sales took place on the first Tuesday of August, September and October.

Two hundred acres of land were needed to hold the 150,000 cattle, sheep & horses that streamed each market-day into Falkirk from all corners of Scotland. As many as 2,000 drovers, with their dogs and ponies, would sleep in the open and meet with hundreds of buyers from all over Britain.  One observer remarked: “Certainly Great Britain, perhaps even the whole world, does not afford a parallel.”

A drover’s day was a long one. At about 8.00 am they would rise and make a simple breakfast of oats, either boiled to make porridge or cold and uncooked mixed with a little water. The whole might be washed down with whisky. Oats, whisky, and perhaps some onions were their basic diet. Occasionally, they might draw blood from some cattle and mix it with oatmeal to make “black pudding.”

The herd would move off on a broad front of several strings of cattle of four or five beasts abreast, moving perhaps 16-20 km or less a day. The cattle had to be managed skillfully to avoid wearing them down or damaging their hooves, and the drover had to know where he could obtain enough grazing along the way. At the days end, the cattle might stop near a rough inn where some shelter could be obtained, or perhaps the drovers had to sleep out on the open hill in all weathers with only their tartan, woven cloth, called their plaid, to protect them. At night someone always had to guard the herd to prevent cattle straying or rievers stealing them. It was a hard and, at times, dangerous life, but the Highlanders, with their warlike, ‘rieving’ (cattle thieving) past, and hardy upbringing were well suited to it.

Listing the necessary attributes of a drover, A.R.B. Haldane, who made a special study of the drover, wrote that they had to have extensive and intimate knowledge of the country and cattle,  endurance and an ability to face great hardship, enterprise and good judgment and honesty and reliability for the responsible work that was entrusted to him.

In addition to that, they were also often skilled on the bagpipes or learned in other aspects of their Gaelic culture and at the Trysts during the evenings around the fire,the drovers would tell stories linked to their journeys, folk and fairy stories, cow and horse tales, legends explaining ancient features in the landscape, and stories of place names spanning centuries. Many of these stories are now forgotten or are only remembered by a handful of local people who recall living and working on the land.

The peace, after the battle of Waterloo in 1815 finished the Napoleonic wars, meant the shrinking navy needed less beef but other changes were even more important. The first half of the nineteenth century saw a revolution in agriculture. Enclosed systems of fields replaced open common grazing and large, fatter cattle were bred and raised ready for market. More importantly, by the 1830s, faster steamships were being built and farmers in the lowlands and elsewhere started to ship cattle directly to the southern markets instead of by the long arduous overland droves. Then, once railways were established by the 1880, this provided an even swifter and more reliable means of transporting cattle and other agricultural products to market. By then, moreover, the cattle had been carefully bred and were not hardy enough to take the long road anyway.  By 1900 the great trysts were all but dead.

(Photo: Thought to be a painting of a Drove through Callander, Perthshire in the 1870’s on the way to the autumn Falkirk Tryst, artist unknown) 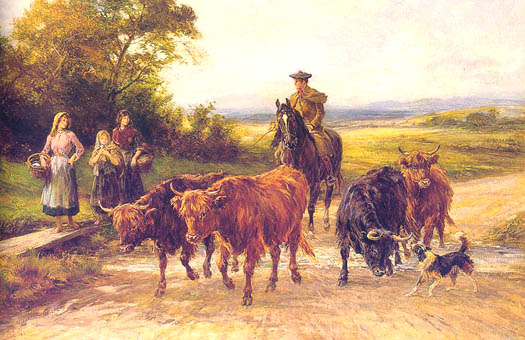 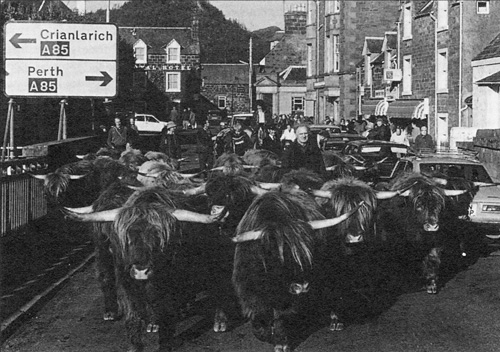 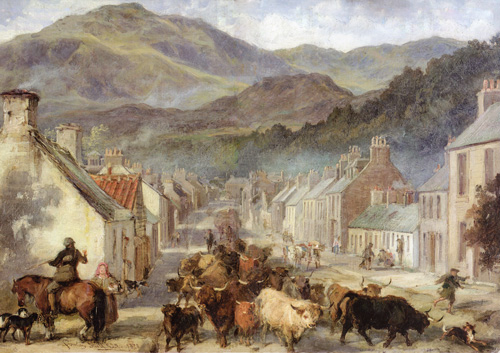 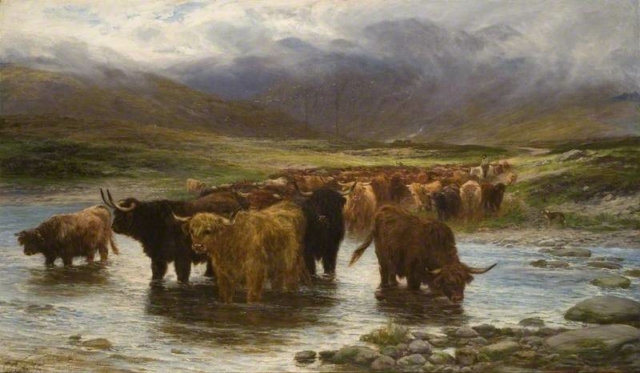 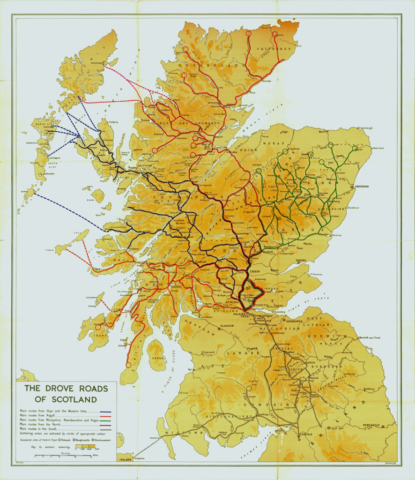 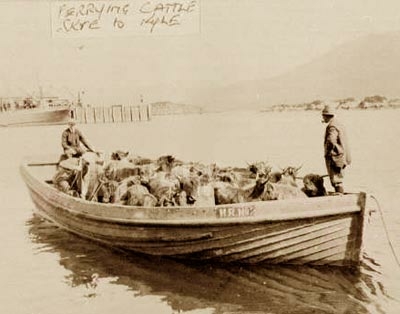 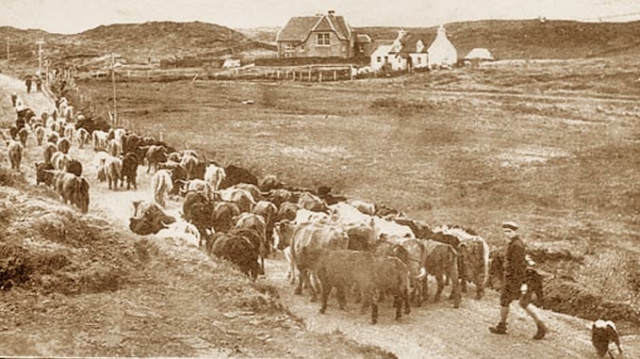 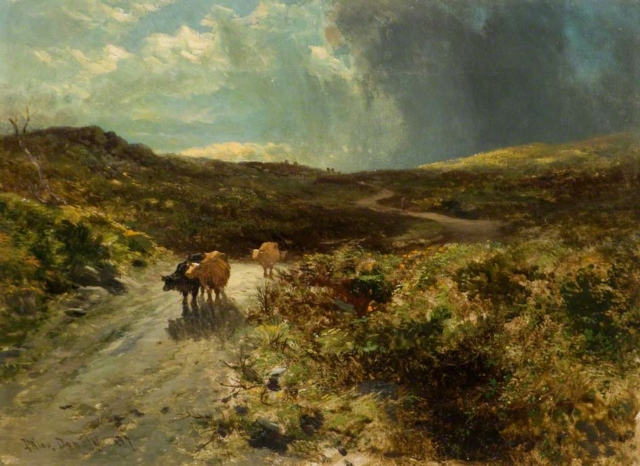 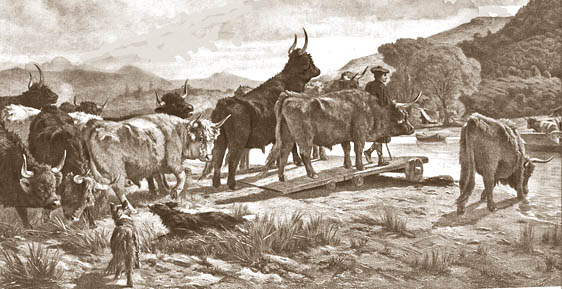