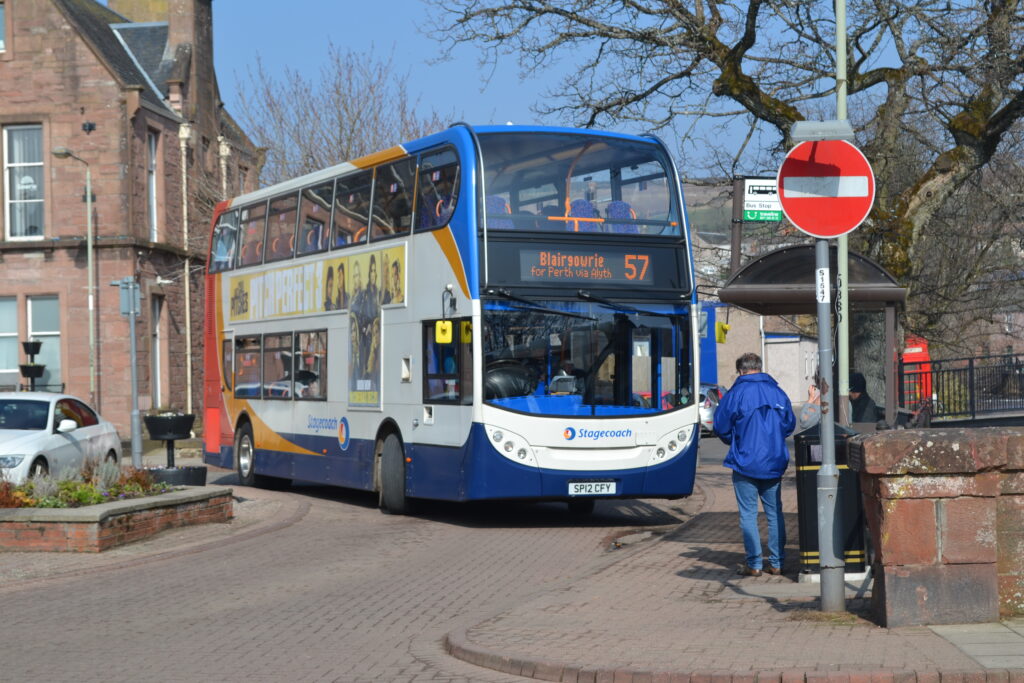 there’s something about double-deckers
transport of choice for rubber-neckers
the way they drive us to work & play through life & strife, the full sway –
a place for lovers under ticketed covers
the full mystery of a top deck
finding fresh words on the road, on spec
only a convex mirror to judge its deep spaces
up – looking down – up to perfect places
old journeys over fresh miles, kent folk & new faces
but always returning to this bus with no airs or graces
the Big One, the Big Loop around East Perthshire heaven
– who needs North Coast 500’s? This is the 57

standing in the dreich, expecting the same keech
mundane, plain & simple to & from work, school
scunnered as a rule then it’s there – staged – coached
we embuss hoping the heating’s working, not so fussed
if the windows are fugged up with other folks thoughts
of their journeys as long as it turns up – forget them nots
circled in time-tables for the shuffle, the politest of Perthshire bustles
between the travel pass loyal, plooky pilgrims, old-timers
first-timers, part-time observers, the hold-yer-nervers
of the East Perthshire roller coaster adventure trail

when the clunkety door clunkety opens, swooshes
to inhale a broth of warm humanity, a new page
for poetic insanity to record emotions on wheels away
from normal, from home, free to think, or just to work normal
& the dispersing fumes from the exhausted plume
armed with a flask & maw’s jeely pieces to brighten the gloom
settling chuffed with yourself – top deck – front row
like you’d anything to do with it, spreading comfy low
into a double seat to yourself, on this pleasure barge
in the bouncy, pilot-seat upstairs – up front – in charge
Does the driver actually know you’re in charge?
Does the driver care you think you’re in charge?
Nae worries. Nae bother. Nae Cares for this is
the Big One, the Big Loop around East Perthshire heaven
– who needs North Coast 500’s? This is the 57.

all the time doing calculations, stoking frustrations
if it gets busier, busy enough, forcing you to surrender half
your treasured space which is not so daft
but has the Bus Inspector made the World aware
above a fare – aware that you’re on it, a word-scribbler
suspending belief in an imaginary bubble, so believe in me
but importantly believe in this – 57 buses like fine wine
become better, more mellow, as you wait in line
more forgiving to the argy-bargy of a morning queue
because there’s nothing else for the 57 to do
but shoulder your double-hearted blame
of going to work, to school & as a rule it’s the same
on the 4, 34, 36, the 15, 16, 17, or venting your spleen
on the Tulloch 1-2 wee loop & even the Scone Park & Ride
the peely-wally palais glide out-of-town shopping run

but here now easing into Top Deck 57 – the lumbering one
into Blair, Hamish Henderson comes alive, high five’s,
Sheila Stewart & the Bairns o Adam dance a jig o joy
down the brae, into the square – the Wellmeddy, wi mair
folk ready for the parallel clatterin by the Cateran
weaving up, bouncing down to Alyth, splatterin
through berry juice haar, on to Meigle, or by Coupar Anxious
then not so far for Burrelton, t0 a tummle-ton for Kinrossie
not for a loss of a phone signal, or your fancy-dan wi-fi
& why you can’t help but think of the Perthshire folk
who have sat here, who are now probably dead / early-pearly
gate, bus pass swiped or at least wiser in the head
away from home, free to roam with open ended shopping lists
bucket lists or tweed sleeve demists amongst all those bairns /
shoppers, the one-way tickets & never-stoppers

& you wonder, how many people, how many of the loyal,
bus pass poets of yesterday, school run poets of tomorrow
have sat here like you with a bag of poems, mentally coiled
bursting to get out, scribbling like you in the sun or the rain
dream-catching, nebbing out the best non-plasma screen ever
the endless nirvana of 57’s stories rolling underneath the big window
leaving the knots of old journeys in ribbons of memory
to sense them tied to the chrome seat handles
to watch them quietly, softly seep into cityscapes
weave threads through blanket towns, become village backdrops
dotted by stops, for sonnets to make sense, to rhyme in time
with verses of fresh poems behind every wise door
every tree root & every box junction a stanza reflecting
in every puddle splashed from the steady beat
of the 57’s life-defining, life-sustaining arterial pulse
as you all should do soon & as I will always do again
to honour my art, so take a bow you double decked heart
as we stand here, making it clear, ready to start
on the east Perthshire roller coaster adventure trail
& without fail you’re the Big One, the Big Loop
around this emotion on wheels, East Perthshire heaven
& after all, who needs North Coast 500’s? This is the 57. 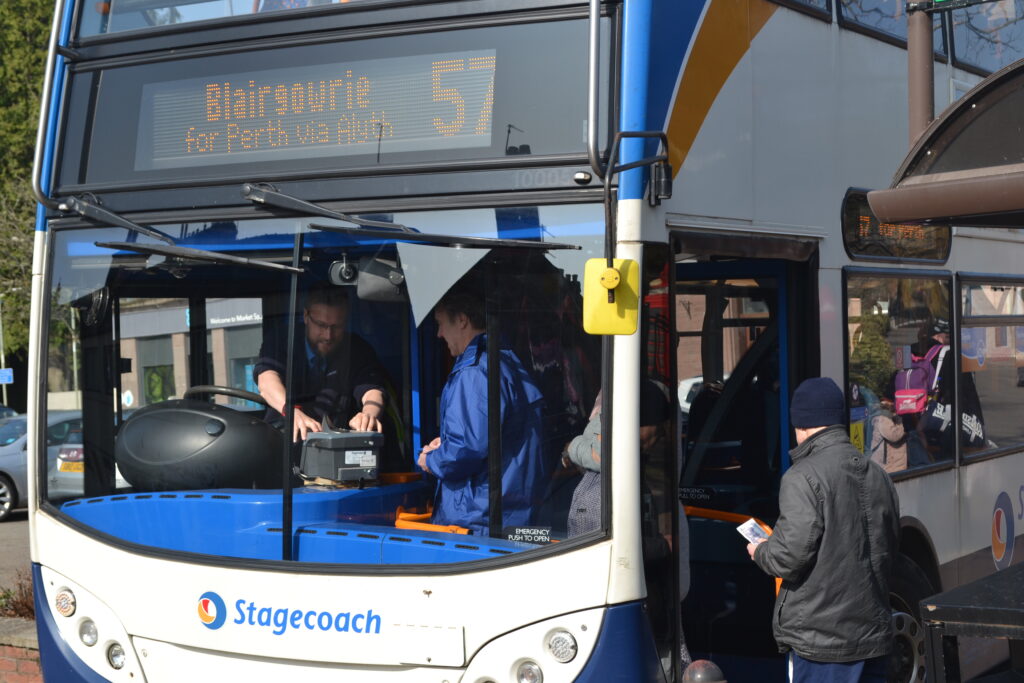