In addition to being Councillor for Blairgowrie & the Glens and involved in a host of other organisations and projects that promote outdoor activities and sports, Bob Ellis has played a key role in the story of the Cateran Trail. In this post he told Clare Cooper how it all began and why it holds such a special place in his heart. 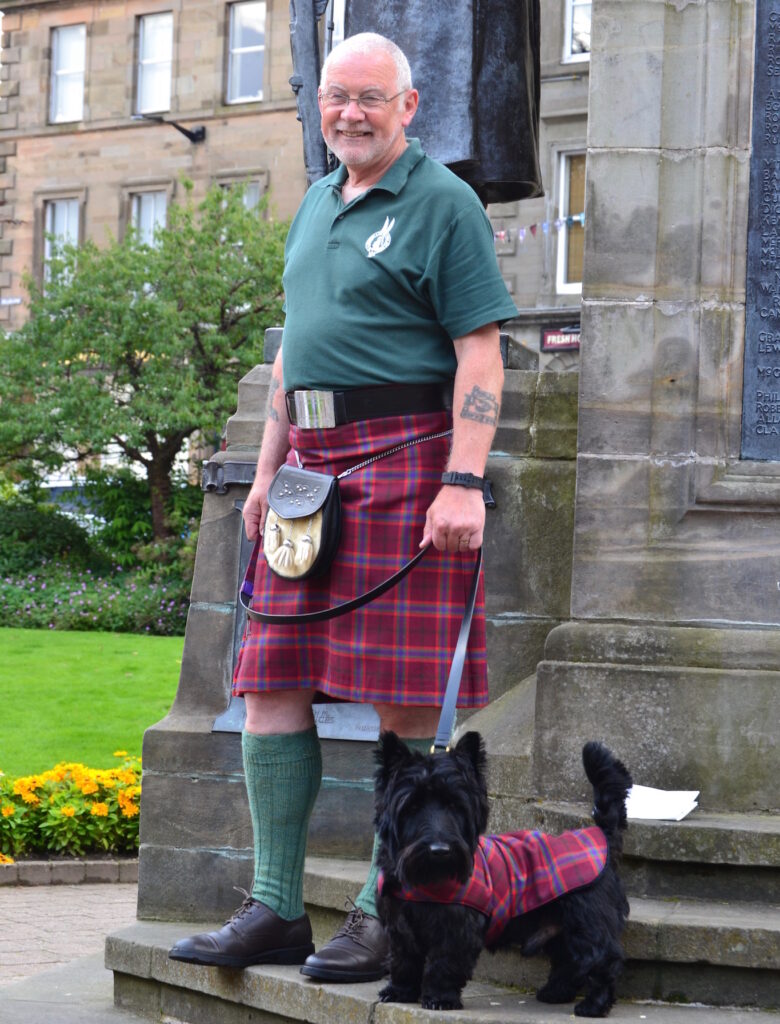 Bob, you were one of the Founders of the Cateran Trail, can you tell us how it all started?

I was approached by a chap called Alan Dick in the summer of 1999, who had the idea of a long distance circular trail around East Perthshire. He was told that I was an authority on all local paths!

We poured over various maps and came up with a route. We then set out together, Alan driving his car and me running with a Dictaphone describing the route and what had to be done on it. Once this was done, we both approached all of the landowners, around 40 of them with a basic agreement form. I also contacted Perth & Kinross Countryside Trust of which I was a Trustee with a view to them looking at the prospect of overseeing the Trail, putting together a funding package and agreements with the landowners. It was then that we all came up with the name “The Cateran Trail” named after the infamous highland brigands who went about rustling cattle.

The Trail was properly way marked and opened and launched by John Swinney MP in the year 2000. One of the visions that we had was to boost the economy of all of those villages, B&B’s and other attractions on or just off the Trail.

You’ve also been on the Steering Group for the Cateran’s Common Wealth initiative right from the start – what excites you about it’s vision and what do you hope its impact will be locally, nationally and internationally?

It was an honour and still is an honour to be asked to come onto the Steering Group of the Cateran’s Common Wealth initiative right from the start. Anything at all that helped promote not just the Cateran Trail but also what we have in East Perthshire and West Angus in the way of all aspects of culture and adventure.

My vision would be that this project when up and running attracts locals and visitors alike from all over the world regardless of age, ability and profession to come and see what is on offer in this somewhat forgotten part of Perthshire. We get people from all over the world walking the Cateran Trail from South America to New Zealand and in between, we have written evidence of this because people sign the visitor’s book in the Upper Lunch Hut which is a feature on the Trail and a welcome refuge in inclement weather. The Hut lies around 4 miles north of the hamlet of Enochdhu.

We get around 8,000 walkers a year on the Trail and this figure is rising year on year, I see this figure rising even more as we attract the more cultural people who will come and look at the cultural history and scenery, which lies on and around the Trail.

There is so much work that has already been put into this project by its’ founder, Clare Cooper and from the word go, her own visions have attracted enthusiasm from other recruited members of the Steering Group and there is an eagerness from us all to conquer any obstructions put in our way and I suppose that is a vision from us all.

We’ve lost touch a bit with this notion of ‘common wealth’ – the things that belong to all of us – yet the Cateran Trail area has an abundance of it, from its spectacular landscapes, to its history and heritage, from its contemporary arts and culture to its strong sense of community, what aspects of that common wealth do you find yourself connecting with most and why?

My connections with the Trail are easy. I may say that it is my baby and it has realised all that I wanted it to do. It has boosted the economy throughout all of the land that the Trail passes through. It has brought communities together. People are making friends with each other. But I suppose the main thing would be that I have come to realise that others are coming up with their own pet projects and they are proving successful, like the Eco Camp at Blackwater, the Community Shop in Kirkmichael is doing really well, Clare’s Cateran Common Wealth project has been born out of it. Seriously, I could connect with a whole amount of things, people, places and projects.

If you could only visit one spot on the Cateran Trail, where would it be?

I could say that my favourite spot is the whole of the Trail but being put on the spot, I would have to say the top of the hill overlooking Auchentaple Loch is the bit that I could sit at all day and night and just lose myself (with a bottle of a good malt of course).