Duncan McLaren and Kate Clayton are artists living in Blairgowrie. A writer and visual artist respectively, they are two of the 120 or so people and organisations who have identified themselves as working with arts and culture in the Cateran Trail locality during a recent mapping exercise and with whom the Cateran’s Common Wealth initiative aims to work with closely. Here Duncan reflects on some of the common ground shared in his conversation with co-producer of Cateran’s Common Wealth, Clare Cooper.

Clare came to Blairgowrie this morning and introduced Kate and I to a vision of how contemporary art could be introduced to our local area, a backyard I’m already beginning to think of as ‘Cateran’.

The project’s principles: integrity of place, taking an existing asset approach and emphasising bigger-than-self values, we could identify with. (Though in the past I’ve been slow at getting beyond the self, thanks to all the van Gogh I was exposed to in my youth!) And the project’s themes: restore, reconnect and reperceive didn’t just roll off the tongue, they immediately made sense to me.

It got us thinking and talking about many things, both during the meeting and after it, but before Clare left I promised I would send her a scan from a book called Perthshire Illustrated, which was printed in 1844 in the wake of Queen Victoria’s love affair with Highland Scotland and her purchase of Balmoral. Here it is: 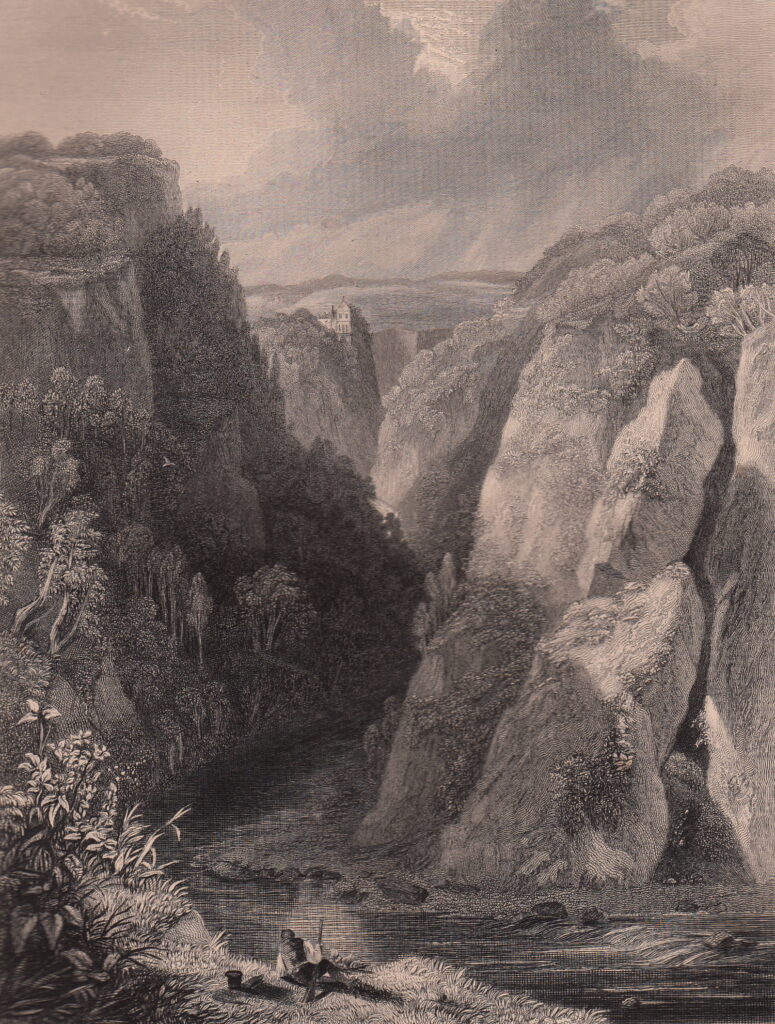 It came to mind because it seems to epitomize the common wealth, natural and cultural, here and now. The 200-foot gorge is spectacular; the site of Craighall Castle couldn’t be more romantic. The view belongs to us all since the right to roam legislation was introduced in 2001. But the marvellous image itself, a steel engraving based on a painting, is part of our shared heritage too as it’s long out of copyright.

In March, 2012, I went to the site of the image, took photographs and walked the cliff-top path towards the house. I wrote about Walter Scott’s visit to the castle as a young man and his use of the experience in Waverley; I described the peregrine falcons that nest in the cliffs; and retold jewel-like anecdotes from my father about each of the last three generations of Rattrays, the family that owned the house from about 1500 to 2010.

Together, right to roam legislation and Andy Wightman’s book, Who Owns Scotland?, inspired me to do the work I did that day. But I didn’t put it on-line in 2012 as I didn’t feel anybody would read it. Today, encouraged by the principles and themes that Clare communicated this morning, I have uploaded my ‘on-Cateran, off-Cateran Trail’ walk onto my website. And may it inspire a few readers to explore the natural and cultural wealth that our local area abounds with. Remember: restore, reconnect, reperceive. Walter Scott would have just loved it.