Today we launched our exhibition ‘A Story of the Cateran Trail in 100 Objects’ at Alyth Museum. It was opened by Bob Ellis, one of the Trail’s founders and one of the youngest members of East Perthshire’s community to have walked the Trail, Sebastian Goodman. One of Scotland’s great long-distance footpaths and fully waymarked, the Trail’s circular 64-mile (103-km) route through Eastern Perthshire and the Angus Glens follows old drove roads and ancient tracks across a varied terrain of farmland, forests and moors. 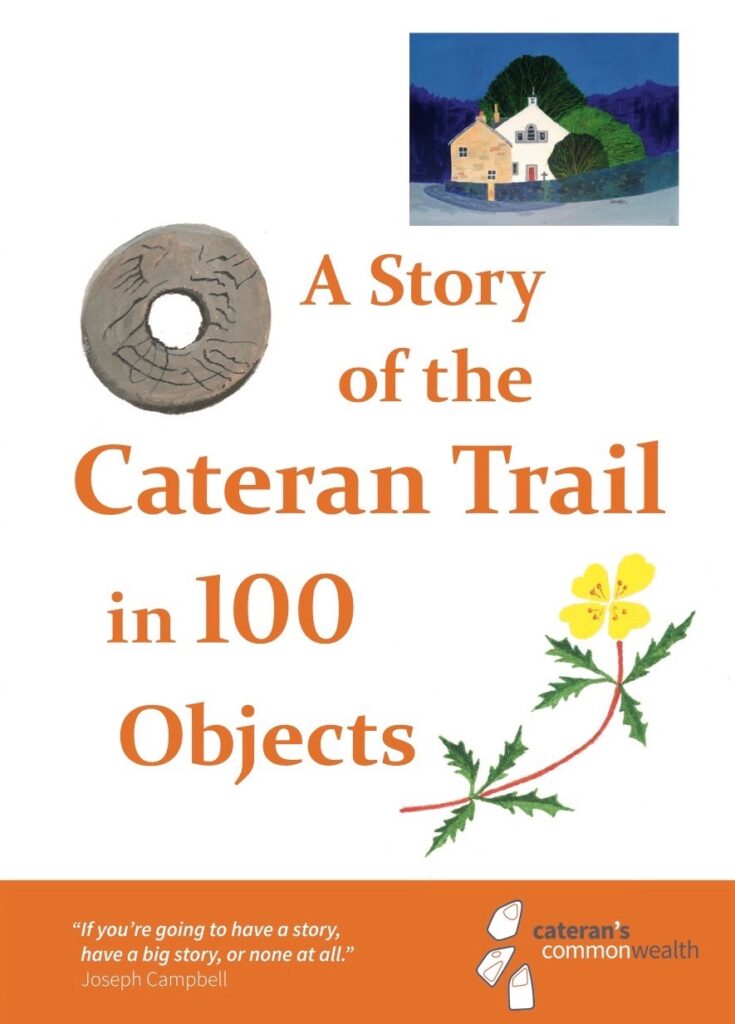 Some of the routes follow those used by the Caterans, the name given to the Highland cattle raiders who were the scourge of Strathardle, Glenshee and Glen Isla from the Middle Ages to the 17th century, and after whom the trail is named. 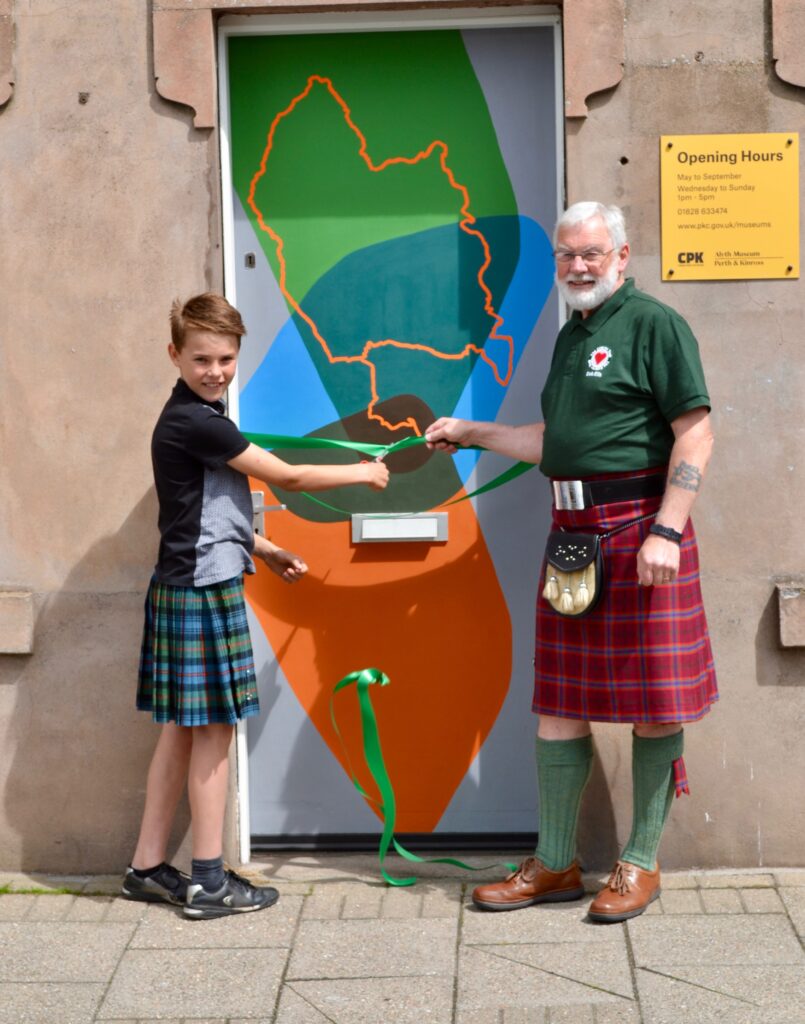 The Exhibition is the culmination of a project that invited people who live and work around the trail and visitors to propose objects that they believe tell an important part of the story of this area of Scotland through history up to the present. Typically, an object is a material thing that can be seen and touched, but that definition has been broadened to include people, places and landscapes, as well as objects relating to them. Suggestions were collected online through a public campaign over the winter of 2016/2017, and in April 2017, an advisory panel chaired by Bob Ellis, selected the final 100 objects. In addition to the Exhibition and the accompanying booklet, walks, talks and online resources relating to the history, heritage and archaeology of the Cateran Trail have been developed, including digitised lesson plans designed for local primary schools. 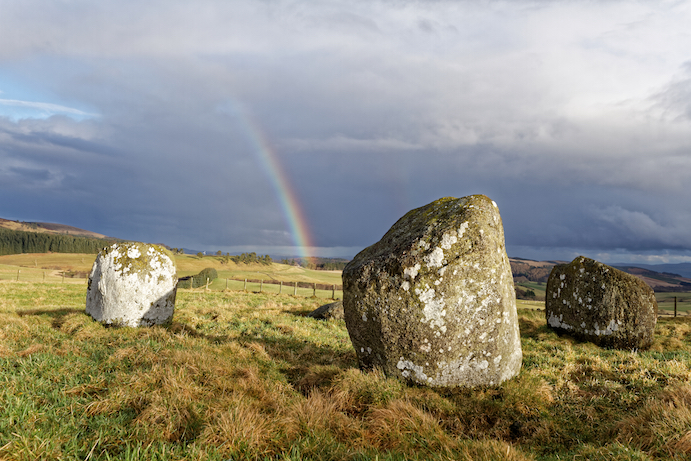 Bob Ellis said: “The Cateran Trail was initially discussed between myself and Alan Dick in the summer of 1997. It took a year and a half to get all the landowners on side and agreements signed and then six months or so to get all the posts in place with arrows and it was officially opened by John Swinney MP in the summer of 1999. I’m delighted, that 20 years since that first conversation with Alan, we are celebrating the incredibly rich history, heritage and contemporary culture of the Trail through this Exhibition. The variety of suggestions put forward through the public campaign has been extraordinary and I hope that many more people will come to the Exhibition and feel inspired to walk the Trail as a result.” 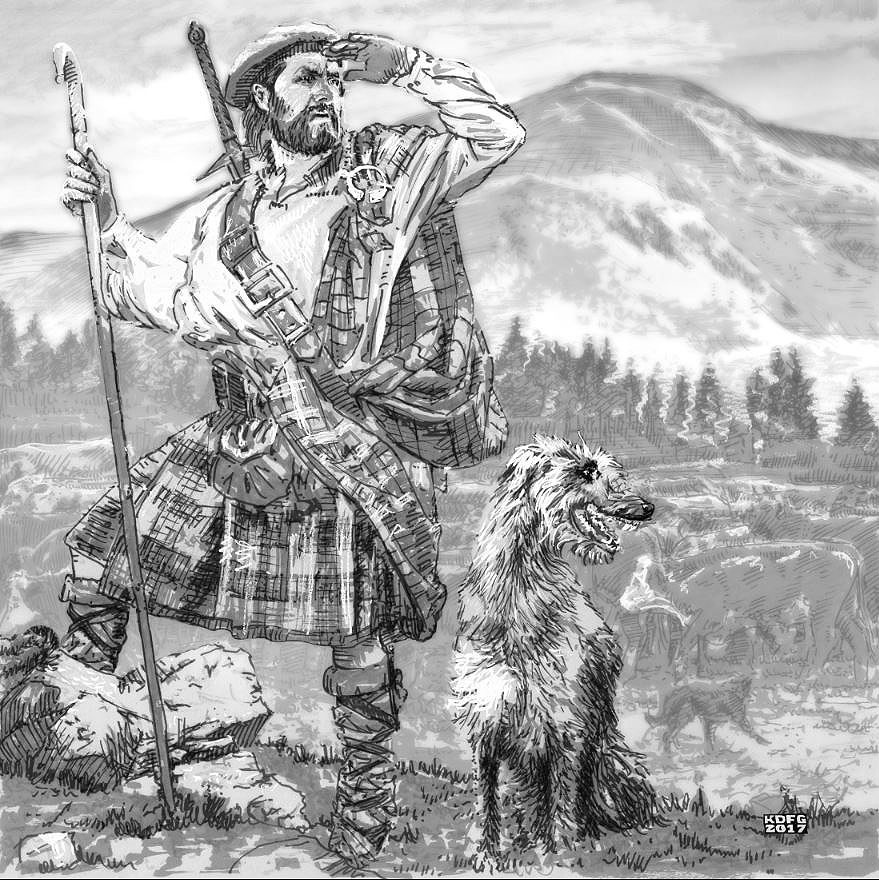 A Cateran as imagined by Glen Isla illustrator Kevin Grieg

Clare Cooper, one of the Project’s Producers said: “Eastern Perthshire and the Cateran Trail are two of Scotland’s hidden gems. As well as being extraordinarily rich in history, archaeology and cultural and natural heritage, this area has a thriving and diverse community of living artists and makers and we are especially grateful to five of them for generously sharing their creativity and imagination through this Exhibition”.

A Wolf, one of the final 100 Objects, by Alyth artist Martin McGuinness

Lucy Casot, Head of HLF Scotland, said: “Cateran’s Common Wealth: Celebrating and Sustaining the things that belong to all of us is a fine example of HLF’s Heritage programmes that, thanks to National Lottery players, makes it possible for local people to choose what is important to them, what they want to save, and how they want to spread the word throughout their community.

Explaining the importance of the Rural Perth & Kinross LEADER support, Jackie Brierton the LAG chair said; “The award of £41,761 towards this community initiative is one of a number benefitting from the £3.8 million share of LEADER and Scottish Government funds available for rural communities and enterprise in Perthshire until 2020. This is a creative and imaginative way to highlight East Perthshire’s history and heritage and we are pleased to have supported it”

The project is registered as part of Visit Scotland’s Year of History, Heritage and Archaeology 2017.